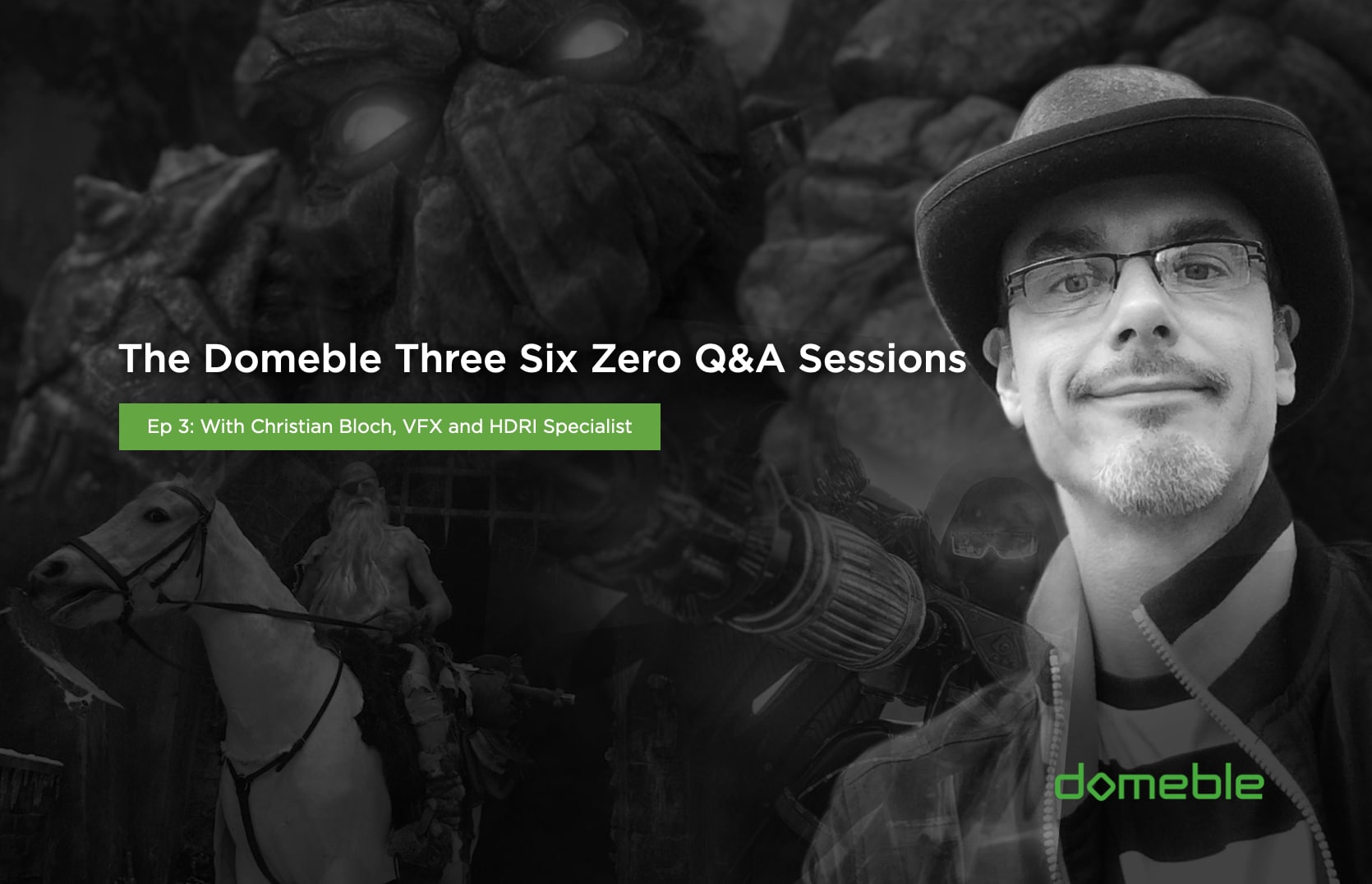 We recently had the pleasure to speak at length with the HDRI legend Christian Bloch on his career and how he sees the future. I think it’s fair to say that for photographers making CGI scenes and learning how to produce good renders, his HDRI Handbook (The Bible, as we call it at Domeble) has been the go-to educational source for understanding and creating good quality 360° HDRI content.

How did your career start and how did you end up in LA?

I came from Germany and I was always kind of into 3-D. I wanted to study something in that direction. But the best thing you pick in 1994 was media technology and was a brand new course at the HTWK Leipzig, a college for technology, business and culture. It was technically a college. One of those ‘homeschooler’ courses – as if it’s It was a technical engineering college, one of those in-between university education and a corporate sponsored school, with some 3D stuff promised in the 7th term. And in the 6th term I did an internship in Berlin at ID Media in 1999, doing a laser scan German Telekom project at the expo, and this was my first professional exposure to 3D. So when I got back to college my tutors said, hey Blochi, you know 3D now, do you want to teach the term 7. So they signed me up to be like a lab intern, but this didn’t really help me with my 3D work, so I signed up for a secondary internship, applying for over 30 places and ended up at Eden FX in LA. I then came back to Germany to finish my degree and chose HDR as my degree topic, and that became the foundation for the HDR handbook.

So from this point, how did the HDR Handbook take shape?

It was actually my professor’s idea that I should publish it. I tried lots of publishers who said it was too fringe so I started a website and put it on there, and it got 30,000 downloads, because people wanted the information and were eager to find out about it.Eventually a small publisher in Germany wanted to publish it, but I had to re-write it in English, make it less technical in language and make the technical stuff into illustrations to help sell the book, and finally it got published under an American company called Rockynook. It was crazy. It was published at the time photographers wanted to know about HDRI for CGI and it sold like over 80,000 18,.000 copies in 6 languages. 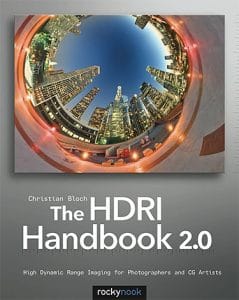 And V2 – was that a natural progression?

I had to try to simplify complex words with simple illustrations, and there was 7 years between V1 and V2, and a lot of the forum discussions on my website formed a lot of the additional information for the second book. I went way over my page count and my publisher was really angry, as I produced so many extra pages so they had to sell it nearly at cost. But they finally made their money back on ebook sales.

How did you arrive at having your own SIBL (Smart Image Based Lighting) format?

It was out of necessity really, as render engines at the time had no Importance Sampling and very basic functions and very little information was being used from the HDRI. And because I like production values, I wrote my own format to get more from the render production.Some people adopted it, but now I feel it is the time for the next generation of SIBL; a new format where we can really extract huge amounts of information from an HDRI. By this I mean we could connect with more than render systems – things like ‘real time’ systems, so that we can look at a pre-packaged environment, not just an HDRI. That will contain more from a scene, and could be detailed three dimensionality, possibly motion, with extra data such as time of day, altitude and longitude and that type of thing could be really interesting.

Where do you see the next version of HDR workflows and pipelines?

I’d like to produce a version of SIBL (V3) that means we can get more out of the sets, even with multiple stages of compatibilities in 3D productions. I’d like to see it contain geometry, with mapped background panoramas and perhaps have it automatically standardised to something like a .fbx format. It could even have a depth map for the panorama, and be read by systems that understand depth map extrusion, and this could then be read as a proxy scene by all softwares. The idea would be to enrich all the systems with more useful scene ingredients and have most software packages on the same road.

You’re a VFX specialist at heart, what are your favourite projects you’ve worked on?

My Hollywood debut was on Enterprise, the last installation of Star Trek, back in the glory days of VFX. I’ve also worked on Lost, 24 and I supervised on Chuck which made me fall in love with comedy shows. Also I did a lot for Disney – some silly shows like ‘Dog with a Blog’. I’ve done so many thing over the years, they’re all listed on my iamb IMDB profile . But I’m most proud of the Space Shuttle display I did for the Kennedy Space Centre. 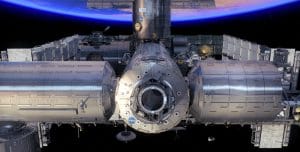 You recently Produced your own short film; tell us about that.

I produced a film call ‘Troll Bridge’ which is an adaption of the Terry Pratchett story which took up most of my life for a while. I quit my day job to make it and it took up a lot of my life. I’ve been working on it in the evenings for nearly 15 years, before the book, between both books, and eventually even quit my day job and worked on it for full-time the last 3 years. I’m very proud of it, and it’s won a lot of awards. Check out the trailer here.

Where do you you see the future of rendering going?

I think it’s mostly going to ‘real time’ – probably 80% of it will be. But nothing totally disappears, so traditional rendering will always have a place. I think what ‘real time’ will do, is open up rendering for people who never could before or didn’t even know about it.

So what’s next after Covid 19 for the industry?

I think big productions will be less necessary as people use more virtual scene creations – giant plasma walls – even much more than green screen, which is old school already. Also high quality super resolution HDRI assets will become more and more used as people need to create super resolution scenes.And games will become real at some point too as ‘real time’ rendering becomes the normal.

Where do you see the VR world going?

It is already normal, particularly architects and cars. They don’t want static images as much, they just want more and more immersion and finally the games world as ‘real time’ gets more real, but not all gaming will or can work in VR. I think the collaborative VR process will grow massively and this will change how films are made and people work.

I know you teach one day a week; tell us about that.

I’m actually teaching photography at the Nolan GNOMON School of Visual Effects, one of the highest ranked schools in the visual effects industry. I teach everything from HDR to Photogrammetry, and try to give the students insights into the technicals of cameras and how they work and all that stuff. I love teaching – it’s absolutely amazing and this school has teachers who all have day jobs in the industry, paired with really clever and super-motivated students. so the students are really lucky to have this experience pool.

What’s your favourite software and what’s your workflow?

For my 3D work I use MODO, and for my compositing I use Black Magic Fusion. I also like Substance Painter for texturing, and with these three titles I can produce everything that I need.

It’s my creative release actually, my play-field. It’s my 30 minutes of power morning, to do a little model, then while it’s rendering I have a coffee and it sets me up for the day like some sort of creative exercise. 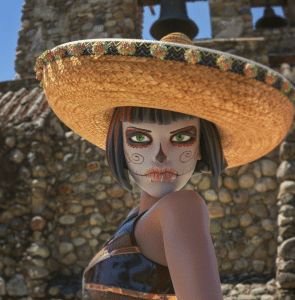 How’s our creative world going to change after Covid 19 do you think?

I think lots of post production will be done from home as the big studios realise they can still have security control remotely. And productions will be scaled down now people see they can save money and work more efficiently. It will be different for sure, but who really knows!

Currently he is a visual effects artist by trade and a photographer by passion. He speaks the language of an artist, and he understands that a hands-on tutorial is a thousand times more valuable to the learning process than scientific formulas. A native of Germany, he lives and works in Hollywood, California. During his professional career, he has created effects for Star Trek: Enterprise, Firefly, Lost, 24, NCIS, Chuck and Teen Wolf, as well as several theatrical movies and more recently, last year he produced his own short film titled Troll Bridge. He has been a pioneer in the practical application of HDRI in post-production, specifically under the budgetary and time restraints of TV production. His work has been rewarded with an Emmy as well as a nomination for the Visual Effects Society Award.Bloch also holds an Engineer’s degree in multimedia technology. Years of research went into his diploma thesis about HDRI, which was honoured in 2003 with the achievement award of the University of Applied Sciences, Leipzig. The HDRI-Handbook was the successor to Bloch’s diploma thesis, rewritten from the ground up and heavily expanded. After selling close to 40,000 copies in six languages, The HDRI-Handbook 2.0 has been completely rewritten once more, incorporating so many updates that it has doubled in volume.

To find out more about Domeble;